Guruji: “It’s an old dream, very terrifying. I saw large number of people doing parikrama (circumambulation of the sacred Goverdhan mountain). I was standing with a very tall man; I was barely reaching his waistline. He was totally black and looked extremely horrifying, with no hair, and his teeth and nails about 4-5 feet long! And behind us, there were millions of funeral pyres burning.

“We were merrily talking. Just then, I saw him casually pick up a passing man, using his nails as forks, and start roasting him on the funeral pyre behind us, all the while talking to me. The man he picked up started crying loudly due to the pain. I asked, ‘if you want to kill him then kill him; why are torturing him like this?’. He answered that until the man’s blood boils in his veins and turns blue, it won’t bring out the flavor! After some time, he ate him and picked up another man the same way!”

“It was a very strange dream. Its still very vivid in my memory. Later when I discussed this with people, I found out that when you heat up the blood to a certain temperature, it actually turns blue. And the most terrifying thing was what he said about blood and developing flavor! It means that in future a lot of people will die out of some blood disease. Their blood will turn blue due to this disease and the torture will lead to their death.”

Q: “Guruji, did such dreams help you give some direction in real life, or were some sort of premonition of events to unfold?”

Guruji: “Yes it does give direction in life. And you also get to know about coming events, in a different way. The black man I saw in my dream could have been anybody. Goverdhan is known as kala devata (black deity). Yamaraj (lord of death) is also black, and the Kaal of Yamaraj is black too. One thing is clear is that the next century is going to be soaked in blood, much more compared to the 20th century! And the next 20-22 years are going to be be very significant.”

Q: “What do you mean by ‘Kaal of Yamaraj”?
Guruji: “Yamaraj is the god of death, and Kaal is a special messenger of Yamaraj; he is death only. Kaal is the one who carries the noose, is totally black, and always remains naked; his description is very terrifying. I feel the man I saw could be Kaal.

“Kaal has other meanings as well. One is Time in Its entirety. Other is, when they say ‘his time has come’ – the moment of death. When we read about Kaal, it’s actually description of the ‘moment of death’ personified – black, with a noose in his hands, etc. I saw this dream around four years back.”

Q: “Guruji, in Mahabharata, death has been described as a lady who prays to lord Brahma that she didn’t want to kill anybody.”

Guruji: “Yes, and she is very beautiful! There is no difference between death and Mother Earth. That is why we also call Earth as mrityuloka, the domain of death. And she is the most beautiful lady in the universe. When she prayed that she didn’t want to kill anybody, Brahma’s blessing to her was that she will never be blamed for anybody’s death. So nobody blames her for anything, they simply cannot. Mind it, Earth is death herself!
“We also know that whenever a person dies, the cause is always something else. They’ll say it was an accident, or drowned in water, or brain hemorrhage, or snake bite, etc. Have you heard anybody ever say that a person died because death arrived? Even if a people dies when a building falls, people don’t say it was Earth who killed him. For them it was the building that killed. If drought strikes some place, they say people died because of hunger.

“Think about it. It is very important. Mother Earth is death herself. As they say, death always walks alongside a person, which is true because we are living on it. And see what happens after we die, we get mixed up in Earth only. We go back to Earth only.”

Q: “How are Yamaraj and Kaal involved in this?”

Guruji: “There are two things here. Our souls have come out of the Void (shunyata), which is also carrying Earth. It is a form of Shiva only, that’s why jiva1 is also called Shiva. Now when the union of Shiva and Earth takes place, multiple life forms are produced. But the soul in a life-form is coming from Void only. The domain of the soul coming out of the Void is that of Yamaraj. He has no concern with the earthly matters. But what a soul learns, experiences, and gains out of its contact with Earth is definitely his concern.”

Guruji: “All parthivta, all that is made of earth. The five elements belong to Earth only, and they dissolve back in Earth. But the eternal substance inside us, one that is the form of Shiva, which is formless, unmanifest, and eternal goes somewhere else. This is where the domain of Yamaraj starts from. The ‘otherworldly’, which is completely separate from the material world. 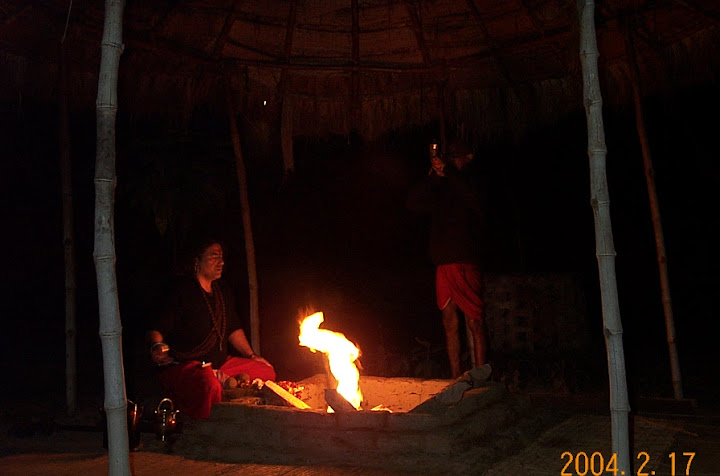 “Then we’ll move to the consciousness of Time. It is beyond even the Void. It is ever present, and yet ever beyond. Remember the movie ‘Matrix’, the scene where the Agent caught Morpheus and was saying to him: ‘I hate this place. I need the code to get out of this place, and the code is in this mind. Give me the code’.
The whole deal is get this code. Once we get this code, we’ll be able to get out of this ‘Matrix’ (laughs). “

4 thoughts on “Mother Earth is Death Herself!”